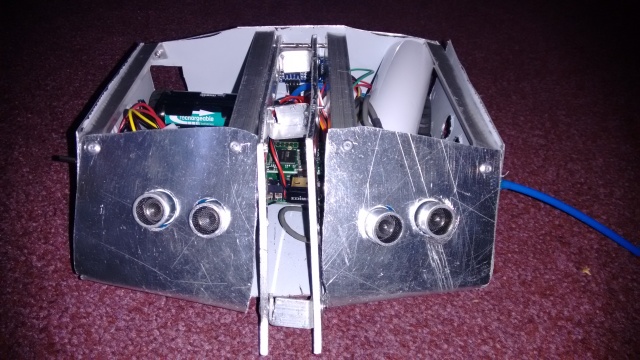 My grandson Elliot wanted me to build him a robot wars style robot. I thought I would try one with a flipper, as chainsaws and flame throwers seemed a bit dangerous for a child.

I have no skills in metal work or mechanics, so it was quite a challenge. I decided to base it on an existing design, as I am not skilled enough to design my own metal chassis. I chose the one that is the top hit, when you google “robot flipper“.

That design is not a robot wars robot, but an autonomous Sumo robot, but it was close enough. I copied the chassis and flipper from that robot, and used the pneumatics design, but completely changed the electronics and the mechanics.

I use these motors and wheels and a Raspberry Pi Zero with a ZeroBorg and an UltraBorg to drive the motors, servos and ultrasonic sensors. I use a Wifi dongle to communciate with it.

The robot looks very battered due to the number of battles it has been it. It is nothing to do with my poor metal working skills.

The robot would not cope well in a real battle. I did not add much reinforcement so it is not very strong. The motors have too little torque to push anything much, it is too high of the ground to flip anything, and the pneumatics are leaky. And it is too small. But it does drive around, detect obstacles and flip things over. I would quite like a full size one to drive.

It is programmed in Python.

Here is some of the insides: 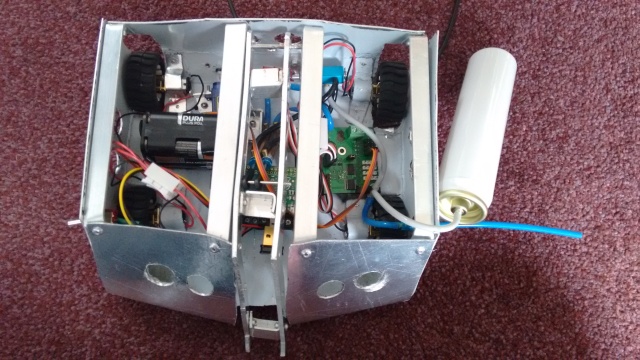 This entry was posted in Raspberry PI, robotics and tagged UltraBorg, ZeroBorg. Bookmark the permalink.