Posted on December 11, 2016 by Lawrie Griffiths 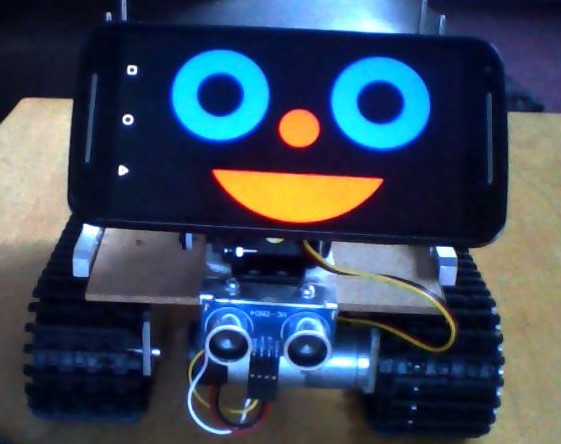 I am working on a social robot to wander around the house, find people, and annoy them.

Some of its features are:

It is a bit like social robots such as Buddy, Zenbo and Aido, but cheaper, and smaller.

I am using this base, which is available from various suppliers, and comes with two motors.

The version I bought came with this motor shield, this ESP8266 module. There are lots of ESP8266 boards on ebay, but you have to be careful to get one that fits the motor shield. It is now a bit old.

The base is powered by 2 86250 3.7v rechargeable Lithium Ion batteries. Battery packs for these are available cheaply on ebay and elsewhere. 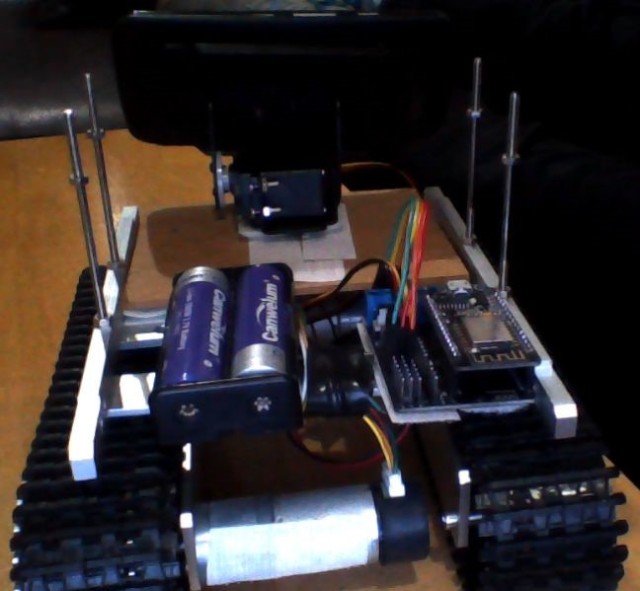 I  reprogrammed the firmware in the ESP8266 using the Arduino IDE. My version connects to my Wifi access point and uses MQTT messages to drive the robot, get sensor values etc.

I added an HC-SR04 ping sensor to stop the robot bumping into things. As the ESP8266 has 3.3v logic, I used an HC-SR04 that worked with 3.3v. They are slightly rarer and more expensive than the 5v only ones.

I am currently just using the tilt function with a single HS-422 servo. The HC-SR04 ultrasonic sensor and the servo are driven by the ESP8266 motor shield.

The Android App that I have written uses:

I am using JavaCV rather than the OpenCV java interface, as JavaCV seems to be simpler and more complete for this application. (I tried both and a combination of them).

On the phone display, I either show a robot face or a camera preview from the front camera. The app recognises faces and sends MQTT commands to the base to keep the face in the middle of the screen. If the face it too small, the robot moves forward; if it is too big it moves back. If it is on the left of the screen, the robot turns right; if on the right, it turns left. It is is high on the screen, the camera pans up; if low, it pans down. In this way, the robot follows and tracks the person.

If you touch the phone screen, you get a small pop-up menu of options. One option is to switch between face and camera mode. The others are different varieties of speech commands:

The phone commands are the Google Now ones that you get by touching the microphone on Android phones. This includes opening apps, asking questions, setting reminders, playing music, etc.

Robots command are ones I have implemented and include driving the robot, and managing the face recognition data. For examples, you can list the recognised people, delete and rename people. The data is kept in an external directory in the phone memory.

Home automation commands are sent to my home automation system via MQTT. So I can switch the lights, television, heating etc. on and off.

I think my social robot can do most of the things that the commercial versions can do,  but it is not done quite as smoothly as the videos for those products suggest they work.

It doesn’t have the story telling capability or game playing or education apps or recipe following of the commercial social robots, but this could be done by integrating with other apps.

The Aido has an optional video projector, which is a nice feature, but expensive.

I need to add a cliff sensor to stop the robot falling down stairs. A few more sonar sensors would help too.

It would be good to add navigation capability but that would need Lidar or a 3D camera, or perhaps a Google Tango phone.

Continuous listening for a trigger word is also possible. It currently only listens when it asks for the name of an unrecognised person, or when you touch the screen and select a speech command type.

Some animation of the face like blinking, eye movement and moving of lips when talking, would be good.

Other things I could add include motion tracking, emotion detection, object recognition, and telepresence.

I will describe the ESP8266 and Android software in separate posts.

This entry was posted in robotics and tagged Android, ESP8266, OpenCV. Bookmark the permalink.